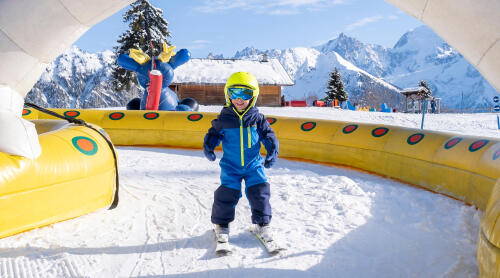 From 3 years of age: Learning the equipment

If your children walk, you can put them on skis, in the "snow garden" ski club for the little ones. They can get used to the equipment. They learn to move around with their boots on, then on their skis by walking, turning around, on the flat. 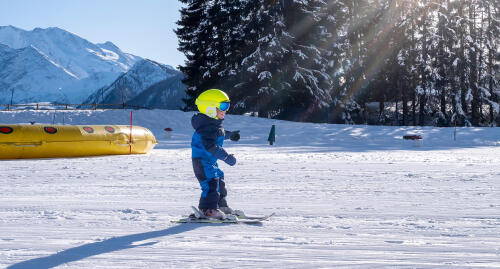 Your children start to slide on a very gentle slope. It's time for the snow plough and their very first turns. They learn to go down controlling their speed so that they can stop. As future champions, they begin to go up the slope on a magic carpet or with a mechanical rope. 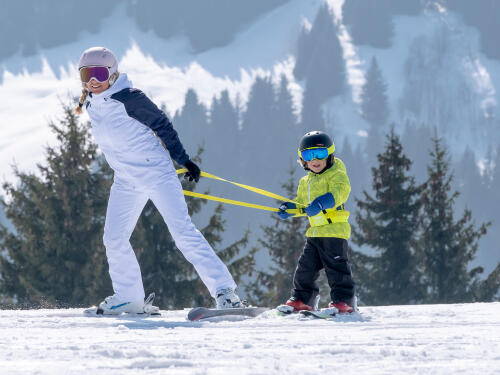 Reassuring as much for the child as for the parents, a harness accompanies serenely the little ones in their skiing discoveries. With its strap, you will guide the child and control their speed with ease!

At 5/6 years of age: turns and parallel skis

Now that they are going like real budding skiers, head to the ski lifts to learn how to do big turns. This is the perfect time to take out your cameras to immortalize this magical moment.

The skis start to be parallel, your children will soon be following you. Prepare yourself for great moments 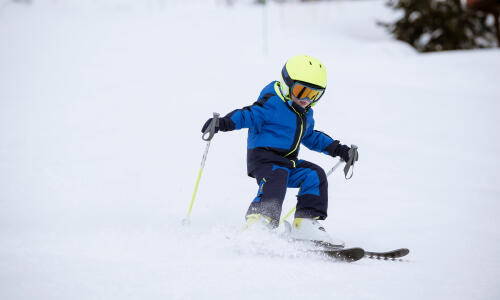 Skiing as a family and being in good spirits

Some tips to maximize the excitement of these intense moments:

Autonomous on the slopes, your budding skiers will be delighted to show you what they are capable of doing. In confidence, they will be able to progress and reveal the champion who is lying dormant!

By adapting your itinerary, you will avoid scares, and their progress will be even faster.

Do you love skiing because it's fun? Them too! The slopes and the edges of the slopes are your playgrounds, they will become theirs very quickly.

Do you know that little ones don't have the same notion of danger as you? It is up to you to remain vigilant on the slopes, and to guide them for more safety: position yourself in front of them and impose a trajectory, because left to themselves they will go straight down.

Like on the road, there are rules to follow on the slopes: priority to the downhill skier, look carefully before setting off again if you've stopped, always remain in control of your speed. Good rules that your little ones will master very quickly.

- Take time to have breaks

Hot chocolate, pancakes, scenery. any excuse is a good one so the legs of your little ones catch their breath, and yours too.

Get started on your ski journey with us!