If you’ve never climbed, we highly recommend taking an introductory course at a climbing gym to get a solid grasp of the basics before heading out on the rocks. Indoor climbing is done on artificial walls dotted with colorful holds. Each route or “problem” is assigned a color code indicating its level of difficulty. You’ll be able to practice bouldering, top rope, and lead climbing. Speed climbing is also offered in some gyms.

Bouldering was invented by rock climbers and mountaineers who wanted to train and have fun on rest days or rainy days. Whether indoors or outdoors, this discipline is practiced without a rope or harness and consists of climbing walls or rocks that reach up to about 5 m tall. Protective landing mats called “crash pads” are placed on the ground below the wall to cushion falls. One of the advantages of bouldering? It’s not very expensive. All you need to get started is a pair of climbing shoes (that you can often rent on site for a small fee) and some chalk (sometimes called a “pof”). You don’t even need a partner. You can just show up to the bouldering climbing gym on your own. This may seem a bit intimidating at first, but the climbing community is generally very welcoming. 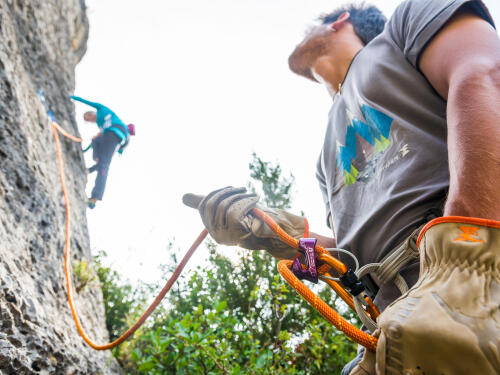 Top rope climbing is all about teaming up and working as a duo. This is often the type of climbing a beginner will try before moving on to sport climbing. You start the climb with a safety rope secured to an anchor at the top (in an indoor gym, the anchor will already be attached to the top of the wall). One end of the rope is attached to your harness; the other end is held by your partner standing below you on the ground. This person is called the belayer and they manage the rope for the climber’s descent and help them to avoid falling. 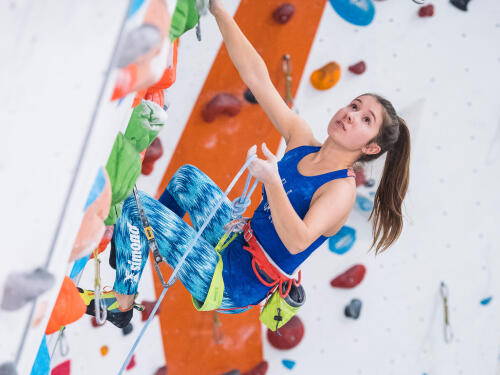 In speed climbing, two people (wearing harnesses and safety ropes) compete in a dramatic race. The goal is to climb a 15 m wall as fast as possible—the first person to reach the top and press the buzzer wins. The climbing path for each climber is always identical—the same holds, in the same places, with the exact same incline. 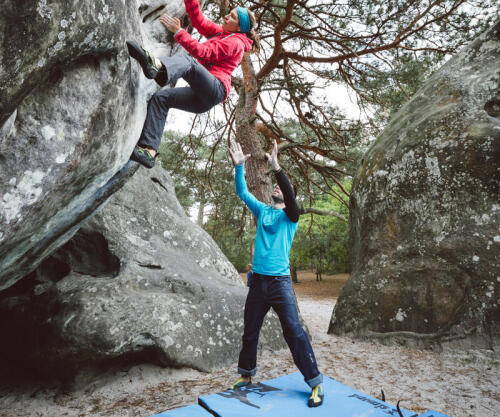 No matter how many times you’ve climbed indoors, your first time on a natural rock wall may surprise you. First of all, don’t expect to master the same difficulty level as you would on an indoor climb. On rock, you don’t have the colorful holds to clearly mark your way. Reading a cliff wall or rock face is different from the surface of an artificial wall. Also, rocks are much rougher on the hands. The maximum height of an indoor wall is about 5 m, with crash pads strategically placed anywhere you might fall. Outside, boulders can easily surpass 5 m. In the event of a fall, the mat (or mats) you have placed on the ground below you are much narrower and uneven than those found in an indoor gym. It’s essential to overcome your fear little by little and to stay humble. It’s important to build confidence by progressing at your own pace.

In sport climbing, you clip quickdraws onto bolts drilled along the route to protect yourself from falling. This style requires more equipment: rope, harness, climbing shoes, helmet, quickdraws, chalk, a belay device, and a chalk bag. Indoors, the quickdraws are usually already attached to the wall. 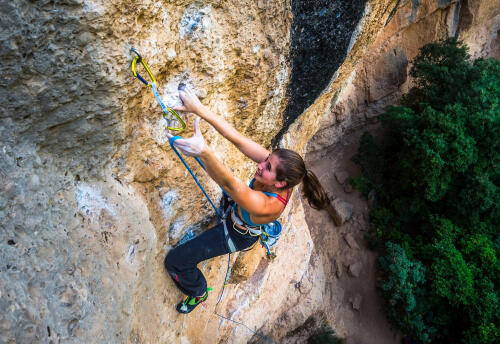 Traditional climbing is considered to be the origin of rock climbing. Trad is all about adventure—there’s no predetermined path or fixed plan. For this style, you need to carry all your equipment as you climb the rock face, placing protective gear in natural fissures and cracks to save you from a fall. There is nothing bolted into the wall, which differentiates this type of climbing from sport climbing. Traditional climbing also respects the principles of “Leave No Trace” since modern protective gear is removable. Nothing should be left behind, leaving the rock free and clear for future climbers.

The name says it all: ice climbing is done on an icy wall with ice axes and crampons. Rock climbing and ice climbing are distinct disciplines. Even if you’re an experienced climber, it’s best to take an introductory ice climbing course and learn the techniques before exploring this new world of vertical ice.

In North America, climbing routes are graded using the Yosemite Decimal System (YDS) that ranges from 5.0 to 5.15d. The higher the number, the harder the route. From 5.10 on, grades are subdivided into A, B, C, or D to further define the degree of difficulty. For bouldering, the North American grading system starts at V0 (easiest) and goes to V16.

In general, choose stretchy, breathable clothing. Outside, rocks can be unforgiving and can rip or tear light fabrics. Opt for long clothes that will resist wear and tear and offer protection against scratches and bugs. Indoors, wear athletic clothing: T-shirt, tank top, shorts, tights, or leggings. Loose-fitting clothing can actually restrict your movements and make climbing uncomfortable. Finally, be sure to remove any jewelry and tie up long hair to avoid getting it caught or pinched.

Find your every climbing need!